ATTACHED: [Initial RE if needed]

My thoughts on the final section of Contact Harvest; please direct your questions to the bottom of document.

>…INTEL: On 289 and the surrounding pages we’re told how the population of Harvest was warned about the alien attack and told to move to safety – but this advice wasn’t met seriously until the Rapid Conversion started glassing the planet.

Trying to put myself in their place, I couldn’t blame the people for their lack of movement. If I was told to evacuate my home because of the threat of an alien species, what would I do? Would I believe it? Probably not.

We’re saturated with disaster movies and I’ve seen Earth destroyed many times on the big (and small) screen. If a news report came on that told me to evacuate, I’d be skeptical.

>…There was a good action sequence of Avery and Byrne riding in the Warthog and their ground battle against Maccabeus. The injury the Jiralhanae Chieftain sustained during this fight would be one of the main factors of his downfall.

>…Jenkin’s family are presumed lost in this chapter, killed by the Covenant. While not fully developed, I thought this was a good reminder that there’s a reason the soldiers are fighting – that there is a cost to war, even to the victor.

>…INTEL: We join Dadab making his rounds on the Tiara space station to check on his fellow Unggoy, and he is reminded of his seminary days spent in the Ministry of Tranquility (located deep in the base of the Ministry’s tower in High Charity).

He goes beyond mere recall to nostalgia – those days with his fellow Deacons were the best of his life, and he misses the comradeship he felt during that time.

This longing to rekindle true friendship causes Dadab to regard any companionship he has with great importance, and I feel this is why Lighter Than Some’s well-being is so important to him.

>…The pilgrimage to High Charity is encouraged to be taken at least once in one’s lifetime, although usually only possible for those who can afford the trip to constantly moving city.

>…Maccabeus turns to Dadab in his moment of crises, when he (Maccabeus) decides to disobey the Vice Minister of Tranquility’s command to destroy the humans on Harvest. Instead, the Chieftain will find the relics on his own.

For as great a sin as it was to disobey the Prophets, Maccabeus had decided the destruction of the gods’ creations was even worse (313)

The decision reminded me of someone else in the Covenant who defied the Prophets, someone whose zeal for following their duty to the Holy ones was also unmatched – the Arbiter.

While the circumstances differ, Thel ‘Vadam also turned his back on the San ‘Shyuum. Maccabeus defied the Prophets because of a perceived misuse of faith; Thel for the abuse of it.

>…INTEL: The Brute Chopper is born, originally a peace-offering to humanity by the Huragok.

>…INTEL: The Governor is taken out of the equation, but not in the way you thought.

It’s always interesting how the civilian government is portrayed in stories such as these (“these” being war stories where the military’s viewpoint is presented). Either the civilian authority only gets in the way of success – as portrayed here – or they’re the last chance civilization has for true freedom when faced with military domination.

>…INTEL: The last hurrah of Captain Pondor; his last moments were well done as he echoes the Insurrectionists’ resolve from twelve years earlier when he tells Tartarus, “Someday we’ll win. No matter what it takes” on page 335 (recalling the quote from page 112).

Right after this moment Loki fires the mass driver into the drop ship and chaos erupts, but Pondor is able to see one last sunrise before he goes…

Pondor was able to find a measure of peace in his sacrifice, and for the character I was grateful.

The Deacon did his best to keep his friend firmly in his sights, but his hand was shaking, compromising his grammar as well as his aim. < Move, or, I, you, shoot. >

< All creatures will take the Great Journey, so long as they believe. > The Huragok’s limbs unfurled with slow grace.     < Why would the Prophets deny these aliens a chance to walk the path? >

Dadab cocked his head. It was a valid question.

“We must let none escape! Maccabeus thundered. “Tell me you understand, Deacon!”

Dadab lowered his pistol. “No, Chieftain, I do not.” Then he switched his signal unit off. (341)

Two things on this passage: first, Dadab’s turning point – he no longer serves the Covenant. Whatever the consequences, he cannot kill his friend. This is a change from the loyal Unggoy we saw earlier in the book, defying his Kig-Yar shipmistress and re-connecting the Luminary.

Second, the Deacon is not the only one to shift his allegiance here. While his mind was undoubtedly made up earlier, Lighter Than Some now puts into words (signs, actually) his feelings – he betrays the Covenant (specifically the Prophets) for a failure to follow their own calling to lead all on the Great Journey.

“I am Chieftain. My decision rules this pack.”

And so begins the fight for dominance aboard the Rapid Conversion. Again, I was impressed with Staten’s ability to write an action scene – the duel and subsequent fall of Maccabeus through the flames as the Yanme’e swarmed around was well done.

Two matched opponents with great lines and a touch of destiny? That’s how it’s done.

(For some reason I kept channeling Mufasa and Scar during this scene.)

It would be many more minutes before Sif had the capacity to process the alien’s simple, existential truth: I help because that is who I am. (349)

Lighter Than Some’s reason for repairing Sif. I think as an author you search for a line, a phrase – something that can explain a character simply. For our resident Huragok, his purpose is clear: to aid whenever possible.

>…INTEL: It was good to see the UNSC and ONI working together, as exemplified by Staff Sergeant Avery Junior Johnson and Lieutenant Commander Jilan al-Cygni. There seems to be occasional tension between the two groups throughout the fiction, so to see each side strengthening the other was a study in how both sides could get along.

>…INTEL: Dadab (enraged after the death of Lighter Than Some at the hands of the 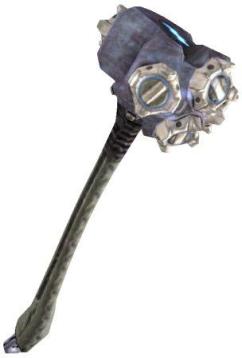 Drones and shocked by the Chieftain’s murder of Bapap) meets his end after taking down Tartarus’ shields with a well-placed shot from his plasma pistol; the new Chieftain crushes the Deacon under the Fist of Rukt – the same weapon that had recently disposed of Maccabeus.

Had Tartarus known Johnson would later be largely responsible for his death aboard Installation 05 (weakening his shields with a particle beam rifle), the Jiralhanae might have decided to take him out when he had the chance – he had shoved past the Staff Sergeant in order to kill Dadab

The alien, Lighter Than Some, had performed a miracle. If it hadn’t repaired Sif’s most essential circuits, she never would have been able to help Loki rebalance the system after the loss of the number-seven strand. But while the ONI PSI admitted that without Lighter Than Some’s intervention the evacuation would have failed, he was quick to point out its helpful nature reveled a capacity for much greater harm. (376)

In war a side will be chosen, whether one means to or not. Good intentions on the Huragok’s part were used to each faction’s own ends, i.e., the creation of the Brute Chopper and the sharing of information with Loki.

>…INTEL: The drama of the AIs closes with Loki destroying Sif’s data center with his mass driver; Mack had tried to prevent this initially, but after Sif’s message to him ( … “It’s Shakespeare, sweetheart”) he relents and Loki is able to fire.

It was interesting that even though both Mack and Sif were (according to page 378) “obviously rampant,” they still put the well-being of humanity above their own personal desires.

>…INTEL: The Age of Doubt ends and the Ninth Age of Reclamation beings as the new Hierarchs ascend the three legs of the Forerunner Dreadnought to greet the crowds; Truth, Regret and Mercy now lead the Covenant.

>…The spectacle of the coronation was well done, with all the species represented by a huge turnout in High Charity and the blessing of the joint San ‘Shyuum/Sangheili High Council.

But ultimately the name he chose was the one that carried the greatest burden – the one that would always remind him of the lies he must tell for the good of the Covenant and the truths he must never speak. (384)

The Prophet of Truth reflects on the name he has chosen, a reminder for the days ahead.

>…INTEL: The information Truth recently gained when the Oracle (Mendicant Bias) tried to launch the Keyship would serve his purposes well in the future. He now knew the Halos were real, and more importantly was closer to knowing where they were located.

All Fortitude [Truth] had to do was make the suggestion that these aliens [humans] who were willing to destroy a planet’s worth of relics would surely do the same to the Holy Rings, and he knew all the Covenant’s billions would crush these “Reclaimers” without question . . . so long as they believed. (383)

This confirmation of the Halos also gave the new Hierach the leverage he needed to make his private war against humanity public.

>…INTEL: Jenkins agrees to become a Marine, and Johnson will have him transferred to his command. As we know these two have further adventures together, it’s always cool to see how things begin.

While the title of the book is “Contact Harvest,” it could easily have the subtitle: “The Cracking of the Covenant.”

Almost every member of each race in the Covenant represented in the book rebels against the San ‘Shyuum at different points in the novel for various reasons:

When the Prophet of Truth took his name as a reminder of the lies he must tell, he did not realize the deeper irony; the suppression of truth would not save the Covenant Empire, but destroy it.

The Covenant’s strength rested in its very name; “covenant” is defined as a “formal, solemn, and binding agreement”, and for that to take place it must happen in good faith. It must be based on truth!

To knowingly introduce falsehood into a society’s core, binding truth was to condemn the Covenant to disaster.

Thanks to all who’ve joined me for this book, and I hope you’ll come back for the next one – The Fall of Reach.

[All images (and much knowledge!) courtesy of Halopedia unless otherwise noted]

[Part I and Part II]