My wife recently surprised me with the Halo 4 Original Soundtrack, and at first I thought it was a bad idea. Oh I appreciated the thought of course but I had originally wanted to first here these tunes as I played through the Campaign and was afraid hearing them beforehand would take away something from the experience. 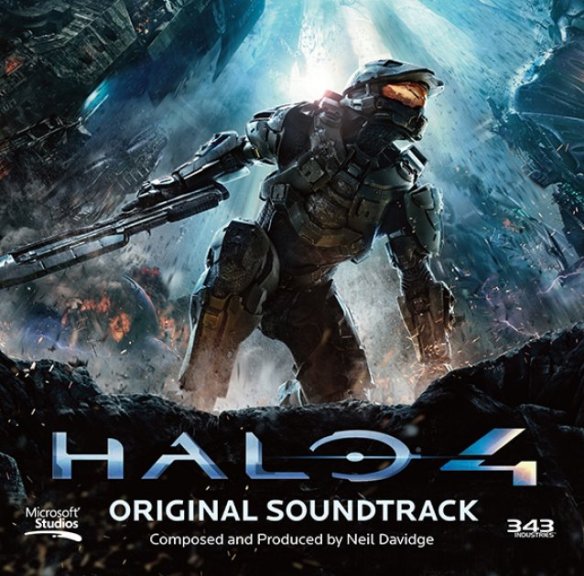 Why yes, I do take my Halo experiences seriously. Why do you ask? 🙂

But like I said it was a great gift and I couldn’t let it go to waste, so why not just take it to work? I could leave it there and not be tempted to listen.

Here’s a sample of my inner monologue after I took the soundtrack to work:

Hmm…since I had it at work with me all day, why not look at the album art? I’m sure it’s awesome. Hey, it is! Sweet!

Right … since it’s already open, I could just burn it on my work computer. That way it would be ready to go after I play the Campaign

As you can guess it wasn’t long before I had listened to the entire thing. But instead of spoiling anything, I found that I was even more excited for the game to come out. The score was fantastic and each time I listened through I felt like I was getting more from it.

It was also fun to think about what could be happening in the game during each one of the tracks, and as I listened to each one vivid images formed in my brain as to what might be going on during Campaign at that exact moment.

Soundtracks often give the audience the cue of what they’re supposed to be feeling during a certain scene and I’m assuming the Halo 4 Original Soundtrack is no different – so with that in mind I’ve listed my thoughts on each track; what I think of the sound, what I think may be happening in the game at the point these songs are played, etc.

First, a couple of general points:

On to the music!

Awakening – I’m assuming this refers to the Master Chief waking up, the beat of being back in action after four and a half years. Hard to believe Spartan 117 is roughly forty-five years old now.

Around 3:23 the trumpets (I believe) come in, and you’ve got purpose, a drive to accomplish.

Is it an awakening of anything else I wonder? My guess is no.

At 4:54 this makes me think of the rest of the UNSC catching up to John, just like the player is. Can you believe it’s been five years since Halo 3?

Belly of the Beast – Starts our pensive, tense. Is this on the decent into Requiem? More likely when it starts out it seems Cortana just told us we’re heading right for the planet, going to be pulled in and we’ve got to do something to make sure that doesn’t happened.

She may have just told us we’ve been scanned, that something is pulling us in. Right at 1:12 you’ve got the sound of steel, things breaking – could be the Forward Unto Dawn.

Right around the 2:00 mark the beat gets really solid, with 2:22 the sound of decent and being pulled into Requiem’s “belly”.

Requiem – At the beginning we get our bearing, at 0:24 we hear these voices and calls – this world is wild and alive. At 0:40 the laser sound (mechanical and science-fictiony), and 0:47 gives us this big theme, the power it (the artificial planet) represents, and something of its majesty.

This sound reminded me of Cryptum, of the Forerunners. This soundtrack could also work as the soundtrack for that book I think.

Legacy – A chorus coming in at 0:07 with a single voice at 0:18. The voice of time? Is that what the “Legacy” is? Is this the voice of knowledge, as John comes to grip with a legacy from the Forerunners?

There is a break and then surge at 1:09, the voices stronger – this may be a big realization moment with the knowledge that was just learned earlier in the track.

Can John accept this? How can he? What must he do?

Faithless – Whom is this referring to? The Covenant’s view of the UNSC and their presence on Requiem? The beat is starts out with makes me think of the fervent desire to crush those who would defile their gods, or their resting place.

Is it a lack of faith in the Mantle?

By 2:15 we’re all business with the beat – I still feel like it’s Covenant, I can see an Storm Elite muttering to himself, “They (the humans) must be stopped.” I can feel their hearts beating and they prepare to do their sacred duty.

Around 2:50 it calms down and starts to change, the same drums but a different beat. Is this a UNSC response to the Covenant threat? Or Chief’s response?

At 3:40 we get a more technical sound, then moving back to the regimented drums. Is there back and forth between two opposing sides here?

Haven – At 0:12 we get some spacey beeps and boops … Master Chief at a specific Forerunner installation/artifact? In front of (or right before) opening the Cryptum perhaps?

I love the piano chords underneath this, and “bum bum ba da bum” at 2:12 to bring us down to earth from the heights we were just at.

The light tapping of the keys until a strong note around 3:00 – at this point I felt like I was in the clouds. What does “Haven” mean? A place of safety? Is John seeing the beauty of Requiem?

Yet at 3:51 we get something else … something foreboding I think. This world is beautiful, but it is desperate. It made me feel a pleading, almost a “get out while you can, save yourself – leave me.”

Could that be Cortana pleading to Chief?

Nemesis – At 0:39 we get the undercurrent … of what turns out to be possibly anger, malice, controlled and simmering.

Then it breaks out in voice at 1:43, a chanting. But even when it gets more staccato and forceful at 2:12 it still seems as if it’s caged – this anger is justified, dignified, not out of control. That may be some of Cryptum coming out as I think of the Didact.

Especially when it quiets down at the end … what’s going on?

Ascendancy – Whose ascendancy are we talking about here? Given the beat and pace, it could be referring to physical ascent – describing a level (or section of it) where the player has to scale something. Possibly even flight in the game?

Or this could be something (yet another thing) laid on John – something he has to do or “ascend” to.

I love the whine at 3:58 when you can feel the strain, he’s (if it is about the Master Chief) almost willing victory.

Solace – I wonder, is this solace a rest from battle or from a loss? Is this acceptance?

At 1:23 these chimes come in, clear. I was channeling The Last Samurai soundtrack here.

3:09 we have the them from the chimes nice and big with strings.

At 3:47 this sounds like pure bliss, joy. And an amazing finish – very nice, and goosebump inducing.

To Galaxy – Starts out with a good beat, a line with purpose. Is this about exploring? The title would make me think so. To what galaxy? Our own? Outside of it?

1:09 the crescendo and a more synthesized sound – very cool.

Right at 2:07 the change, a beat/sound of duty – is that the hint of a tambourine way in the back?

4:08 we start to rise up to the sound that just makes you want to pound with the beat as it finishes, great stuff.

Immaterial – An eerie wail starts out the track, is this the unraveling of Cortana? Or is the Didact actively discarding something (or someone) important – something he sees as “immaterial” but which is of great importance to humanity/UNSC/John-177?

The piano that comes in early doesn’t alleviate the danger, only heightens it.

What about the weird sound at about 3:33? I keep picturing Cortana going rampant, just rambling on, and the sadness Chief feels at watching it happen.

But then the building up to 5:35, this is true chaos – what is that background sound? A metallic voice? What is going on at this moment? Is Cortana at war with herself? With Chief? Is it an internal battle, or actually happening in the physical world?

117 – The single horn, a very military opening for the perfect solider. At 0:45 we get the first part of the theme, it feels to me like navigation – like Master Chief navigating Requiem, the Infinity, everything that is happening to him throughout the game.

It comes in again really strong at 5:28. This reinforces my feeling about Chief always pushing forward, always moving to the next objective – it’s one of his greatest strengths.

At 6:27 when it start to get close to the end, I felt like it was building to a huge set piece – like John had made up his mind, that lead him to this part in the Campaign, and now his follow through meant big things were happening.

Arrival – As this track played I kept thinking, “who’s arrival?”

I also thought of humanity’s arrival as the possible true heirs of the Mantle, but I don’t know if that’s true.

It could be near the end of the game, the arrival at a resolution. There did seem to be a strong “team” vibe going on with this, of union. The UNSC and Spartan 117 perhaps?

Revival – In my mind, this is the power track.

The voices come in with a quiet note in the beginning, around 0:30. I missed the Halo theme from the original three, but I feel like the previous chanting could have been the sound of dormant Forerunner.

Now the Forerunners have returned, and there voice is strong and growing stronger.

The rises of the chant, especially at 2:47 and the sudden higher note of voices at 3:00 – this was the warning before the explosion to come …

Green and Blue – CurrerBell1864 had to point out that this was most likely referring to John-117 and Cortana, I was thinking purely of geographical land and water at first.

The piano that comes in right at 0:57, powerful. Is this the sound of John’s feelings, amid the beeps and bips of Cortana?

Or perhaps her “soul” shining through the technology that embodies her?

The sounds that surges right through to 3:17 and then all is silent … until a harp (I think) is gently played with the technology sounds still played in the background. Wow.

4:30 – what is happening? Is Chief saying goodbye, coming to peace with the fact that she is gone? The strength and sadness of this section makes me feel as if Cortana is gone – I can almost see her reaching out her hand as John says, “I’m not leaving you behind again…”

And yet, the song continues – near 7:07 the music returns, as well as a hint of the technology sound. Could this be Cortana being “reset”? The idea that she has to reboot and lose her relationship with John to survive?

This track more than any other made me wonder what exactly is happening here – the emotion is amazing, so what’s going on?