On a more practical, game design-oriented level, Warner admitted that Halo 4‘s enemies shipped with damage tuning and gameplay mechanics that were less than ideal. “The Watcher often encourages a one dimensional approach to those encounters,” Warner said, “which we saw develop over time through using research and our own play testing. We knew it’d be a problem, [but] we didn’t have a great solution for it before we shipped.”

The above quote is taken from a speech given by Scott Warner, design director at 343 Industries, at the 2013 Game Developers Conference. The title of his talk, “The Design of New Enemies for Halo 4”, is something that got me interested as the Prometheans were something in Halo 4 that had not come before, and therefore could not be based off past systems or games – 343 had to come up with all this stuff on their own.

While unable to attend the talk myself others were there, and the two articles I drew info from (this one by Jordan Mallory from Joystiq and this post by Postmortem on HBO) brought up some great points I’d like to get into.

Looking past the Growing Pains

Scott Warner was very up front with the fact that there were difficulties throughout production that hampered the final product. “Absence of a high level vision”, not having a clear definition of who the characters were in the early stages of development and a compressed time frame all contributed to a game they knew wouldn’t be the best it could be when it shipped. 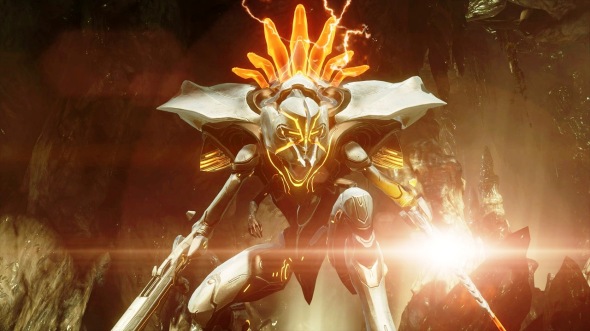 While unmistakably unfortunate, when a company grows as fast to the size 343 Industries did communication problems are going to happen. Hopefully with the studio now established a unified vision can emerge, as well as a better sharing of information between the teams.

“Defender of the Universe” and other good ideas

Postmortem mentioned several cool concepts that Scott had in his talk, the first being that the team took some inspiration from Voltron when it came to how they wanted to new enemy type to behave in the game. 343 wanted the Prometheans to behave in different ways depending on how each enemy type was positioned to each other.

The team also wanted to take their cue from the game of chess, with each different enemy type mirroring the role of one of the pieces – King, Queen, Rook, Knight, Bishop and Pawn. There could have potentially been six(!) different enemy types in the game, but for simplicity’s sake they kept it to three.

Mr. Warner did say those other types could make an appearance in the future though, so who knows? What Promethean would take the role of Rook, I wonder?

Voltron and Chess – what a great starting point! But taking concepts from the abstract into something that works in a game is magic that’s not easy to come by, and that had to be a tough process when coupled with the pressure of getting the game out on time.

There were several things Postmortem brought out from the speech about the Prometheans’ “personality” that I felt wasn’t stressed/explained well in the games, and therefore fans missed out some cool details. First, the sound the Watcher makes when it’s hovering in the air is it talking to a Knight; the idea is that the Watcher is feeding the Knight new information on the enemy, thus giving him the tactical advantage.

Second, the idea that the Knight and Watcher were both part of the same Promethean “soul”, and that it was the same soul being split when the Knight deployed the Watcher on the battlefield. This reminded me of the process an AI can go through in the Halo Universe with different ancillas (Cortana, 343 Guilty Spark, Mendicant Bias to name a few) splitting up to make another version of themselves to survive in some way. 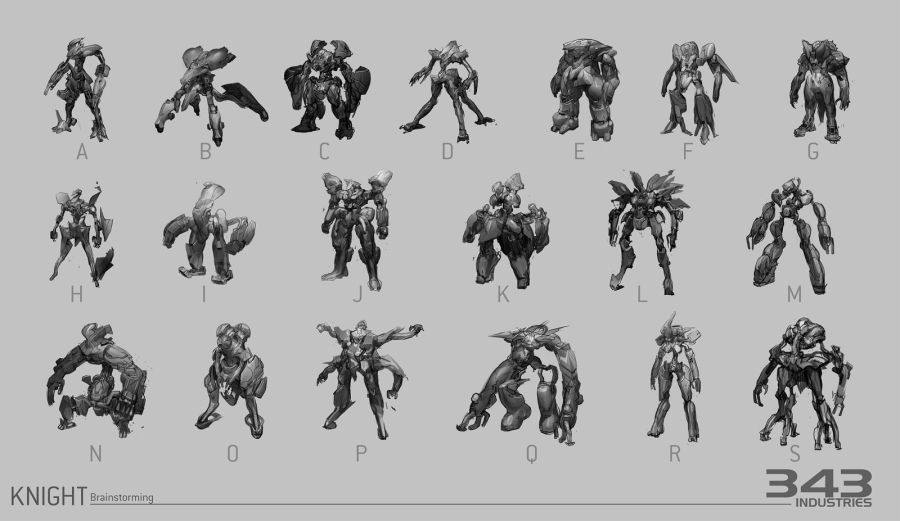 Since the Prometheans are digitized beings, I wonder if it’s a similar process? Interesting.

Third, the intent for the face of the Watcher and the glowing skulls of the Knight to represent “an imprisoned and tormented soul” (as well as a place to headshot in the latter’s case).

I don’t think that idea came through in the gameplay, although we did get references to what was involved in the creation of the Prometheans via the Librarian’s exposition in a cut scene and the Halo 4 Terminals.

In the Joystiq article it was mentioned that Scott Warner felt the Covenant had one thing over their new AI contemporaries – feelings:

Our Prometheans don’t do that very well, they’re very – I hesitate to use the term ‘robotic’, but they tend to not show a lot of emotion or communicate their state very well in terms of what we’d like to do, what we think would be ideal for those characters. So that’s one big area of improvement we’re looking for as we move along with our character development in future games

Of course you could say that due to their transformation that kind of show of emotion has been removed, but I’m always trying to find a way for things to make sense story-wise so don’t mind me 🙂

Do I wish more time would have been taken so Halo 4 could have been something everyone at 343 Industries knew was the best it could be?

Am I excited about the future, with lessons learned and another crack at the Prometheans?